Derby Days originated as a sporting competition for association football. However, since then they have evolved to encompass a variety of sporting events. Arguably, even more popular are Greek Derby Days on college campuses across the U.S. Derby Days are a philanthropic weeklong event hosted by the social fraternity Sigma Chi.

Since its origin as a hallmark Sigma Chi philanthropic event, Derby Days have grown and evolved into innovative fundraisers for causes within the Greek community. For the Delta Nu chapter of Sigma Chi at Wake Forest University, they joined other chapters by heading online to Mightycause for their 2018 Derby Days event.

According to the team’s Mightycause campaign, “In 2017, we donated a total of $41,145 to various causes including: $25,745 to Brenner Children’s Hospital, $10,400 to the Special Olympics Organization in conjunction with the Kappa Beta Gamma sorority (2017 Derby Days Champion), and $5,000 to the Make-A-Wish Foundation with Chi Omega (2016 Derby Days Champion).”

Of course, Derby Days comprise of in-person events, a core reason for their continued success. The team listed their in-person events schedule on their team page to help marry the online and in-person components:

They also listed some helpful links to Google Docs that outlined their points system, their Facebook page, concert ticket sales and more. Their organization played a key role in keeping them on track throughout the two-week long campaign.

The fraternity kept their team members and supporters updated on Facebook by providing milestone updates on how much was raised in the last 10 minutes of the campaign, who won the competition and more.

They created an event on the social platform to help again keep supporters engaged in the in-person and online fundraising events.

2018 Success in the Numbers

Overall, Derby Days 2018 was a huge success, raising $97,000 for philanthropic causes by 917 donors. Their average donation size was $105 – an unrivaled amount considering their primary donor base targeted college student supporters and their families.

According to their Facebook page, nearly $23,000 of that was donated to Make-A-Wish on behalf of Chi Omega – the sorority that raised the most funds for the event. The second place organization, Special Olympics, received $9,000 from the funds raised for Derby Days. And lastly, Delta Zeta’s third-place finish yielded $3,000 for the charity of their choice. 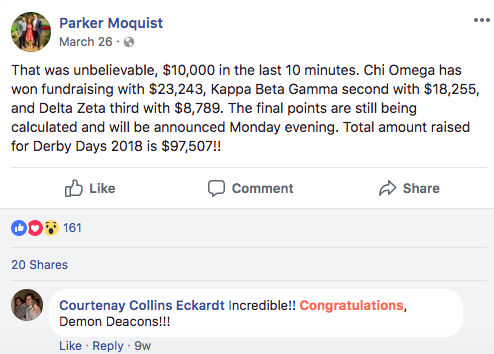 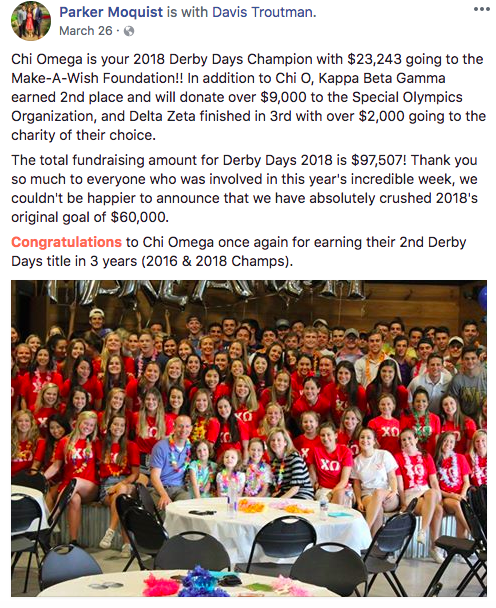 As for the success of their event, the fraternity announced they were pleased with the results. “We couldn’t be happier to announce that we have absolutely crushed 2018’s original goal of $60,000,” they announced on Facebook.