Northern Piedmont Community Foundation was in the market for a new platform for their giving event in 2020: Give Local Piedmont. When they saw Mightycause’s giving event tools on a demo, their team knew that Mightycause could help them elevate their event and do even more to promote philanthropy in their community. But, there was one big problem standing in their way — they had already hosted their event for several years on a different platform.

Nonprofits who had participated in Give Local Piedmont had been trained and were used to using another platform for the giving day. The North Piedmont Community Foundation team was small but mighty, and transitioning their event seemed like a daunting task. And what about all the donor data?! How would they prevent data loss if they moved to a new platform?

Mightycause stepped up to make their transition as smooth as possible. From data migration to nonprofit training, here’s how Give Local Piedmont moved to Mightycause and exceeded their previous giving day totals in both 2020 and 2021. 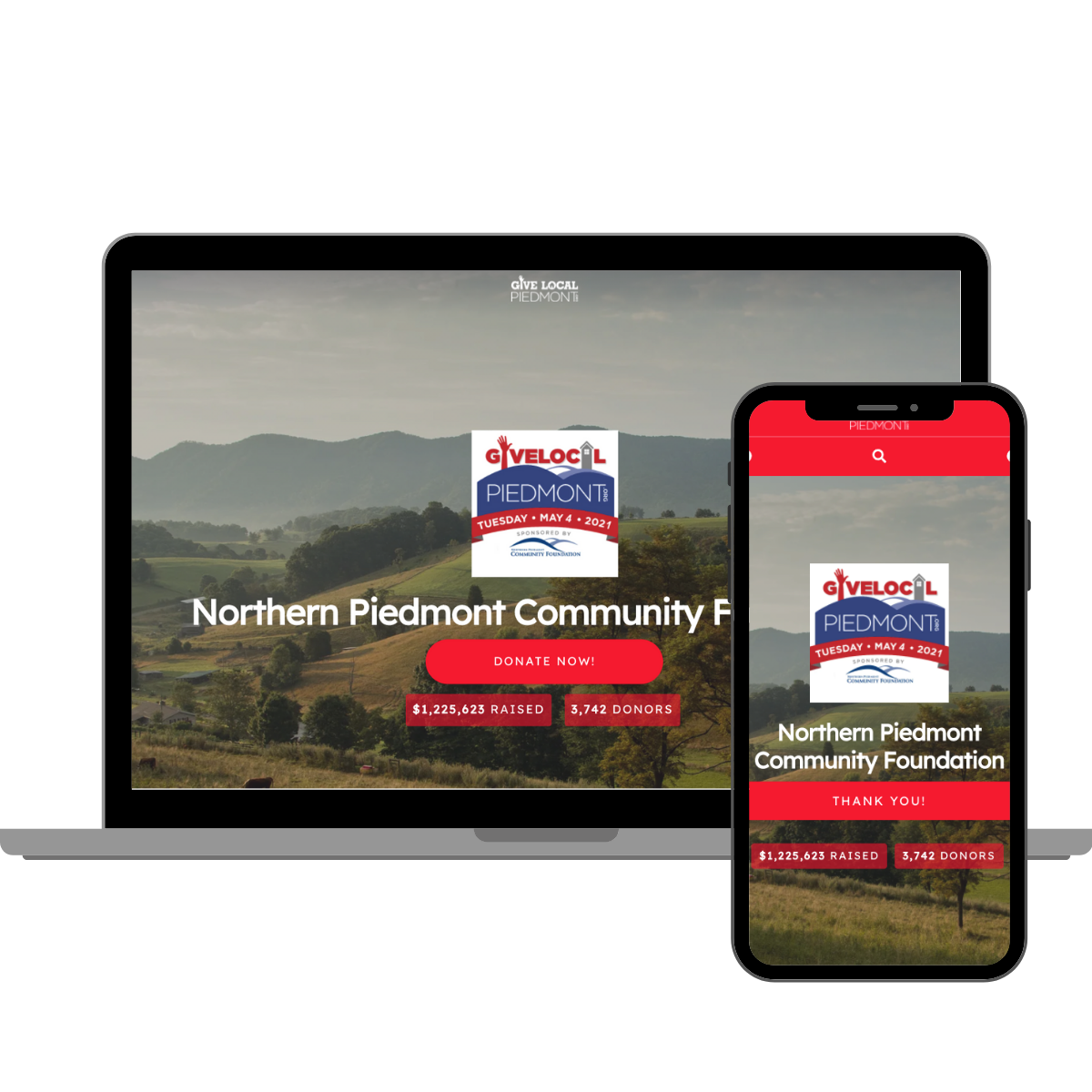 Northern Piedmont Community Foundation (NPCF) was invested in another giving event platform, but it was no longer serving their needs. They were on the hunt for a platform with a modern, sleek look and user-friendly, intuitive tools for them and the participating nonprofits. But, they knew that they needed any potential platform partners to help them with data migration.

It was important that their nonprofits wouldn’t lose data, or have to start from scratch with a new platform. NPCF had limited time and resources to spend coordinating the migration. So, they needed a platform partner that would be hands-on and willing to go the extra mile to help them set up the infrastructure Give Local Piedmont needed to succeed.

Mightycause ended up being the right platform for the job. NPCF loved Mightycause’s modern design on the front end, and the user-friendly, intuitive tools built for the event hosts and nonprofits.

A giving event is a complex fundraising endeavor. Within the giving event, hundreds of nonprofits were fundraising for their causes. Each nonprofit has their own profile, with verified administrators managing their profile. And each nonprofit has their own campaigns and donors. Losing past years’ Give Local Piedmont donor data could seriously impact the event’s success, and the ability of the nonprofits to engage these supporters. Each nonprofit is also busy running its programs and providing services to the community, with limited capacity to manually move data from one place to another. So, NPCF and the participating nonprofits needed the data to not only carry over, but be as smooth and painless a transition as possible.

Mightycause’s team worked with NPCF’s staff to understand the requirements and dove right into migrating their data from their previous platform.

Mightycause was able to migrate over each nonprofit’s profile information, donation history, donor records, and nonprofit administrators for Give Local Piedmont. This was a smooth and easy process.

Our experienced giving event experts were able to ensure that Give Local Piedmont’s nonprofits already had a profile set up. Within that profile was their nonprofit’s basic information, donation history and donor records. This allowed them to hit the ground running for Give Local Piedmont, without having to worry about exporting and storing the data elsewhere and manually uploading it themselves.

It also helped make the registration process easy as can be. Since previous participants were already set up on Mightycause, their login was created and connected to their nonprofit. All they had to do was access the Give Local Piedmont registration form, select their nonprofit, fill out the form, and click submit.

The Importance of Data Migration

Data migration was vitally important to NPCF in measuring the success of their event. Because Mightycause was able to import their data from previous years, NPCF was able to effectively measure their year-over-year data. With their previous platform partner, their campaign raised $893,000. In 2020, Give Local Piedmont hit a huge fundraising milestone. They raised more than a million dollars — $1.2 million, as a matter of fact! And because of Mightycause’s data migration, they were able to measure their effectiveness, donor retention, and even hour-by-hour year-over-year data.

Give Local Piedmont also increased the number of people giving to their 2020 campaign. In 2019, they had a total of 5,867 donors. And in 2020, they boosted that number to 8,089! That’s over a thousand more people donating to causes in the NPCF’s service area.

Raising more money is a goal of nearly every giving event, but NPCF also wanted to do more to get the nonprofit organizations engaged in Give Local Piedmont. Their 2020 event had an even 200 causes. And the good news is that Mightycause doesn’t just set our giving events up on the platform and let them figure it out. Mightycause works closely with our giving event partners to build a toolkit of resources that help nonprofits fundraise, puts together training webinars to make sure they have all the information they need to successfully leverage the platform for Give Local Piedmont, and provides comprehensive customer support leading up to and during the event.

Mightycause also helps support nonprofits outside of Give Local Piedmont. Mightycause’s data integration set all 200 organizations up on the platform, pulling in their donor data, logo, mission, photo gallery, and more… which enabled them to utilize Mightycause year-round.

Give Local Piedmont’s nonprofits engaged more donors than ever after their move to Mightycause in 2020, setting them up to continue building those relationships and turn them into lifelong supporters.

Mightycause understands the pain of data loss and isolation. So, we’re here to support your event just as we supported Give Local Piedmont! From migration donation history to profile elements like logos and content, we can manage the migration so your transition to Mightycause is uncomplicated and easy for both you and your nonprofits.